Back to the home page

Introduction | Reviews | Chapters | Who's Who

A twelve-year-old orphan from Chough, lacking in eyebrows and respect for her elders.

Arson, theft of a goose, espionage, releasing dangerous livestock in a public place, abetting the escape of felons. Is also suspected of blasphemy, sedition, treason, and the reading of illegal and nefarious books.

A ferrety-looking girl with unconvincing eyebrows, meagre for her twelve years but precocious in her villainy. Black eyes, capable of looking poisonous things. Long fingers, designed for other people's possessions. One narrow nose, designed for other people's business. Possessed of a dangerous and unnatural thirst for books. Do not approach, unless immune to sharp remarks.

Plump, ponderous, and generally assuming the manners of one above his station.

Thirty-nine cases of fraud, counterfeiting, selling and circulating lude and unlicensed literature, impersonating an impecunious Duke, impersonating a priest, impersonating a magistrate, impersonating a horse doctor, breach of promise, forty-seven moon-lit flits without payment of debts, robbing shrines, fleeing from justice before trial, stealing pies from windows, purloining tankards, blankets and small furniture from inns, fabricating the Great Palthrop Horse Plague for purposes of profit, membership of that notorious company of thieves and fraudulents led by Mistress Fleetfinger, operating a hurdy-gurdy without a licence. The authorities would also like to question him about the disappearance of one Halk Partridge.

Plump, ponderous, and generally assuming the manners of one above his station. Last seen wearing the waistcoat of one Benwith Cripe and the pocket watch of one Sneep Tether, both of whom would like to see their possessions again. Gifted with a most mischievously used way with words. The public are advised against lending him money, buying anything from him, letting him rooms or believing a word he says. Contrary to his professions, he will not pay you the day after tomorrow. 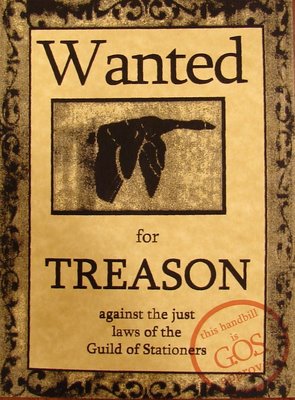 Assault and brutality, damage to property, perpetrating violence upon the waterways, stealing a boat, intimidation for purposes of acquiring food.

Three feet tall at full stretch, muscular, no arms, orange beak, dauntless and intimidating manner. Usually dressed in white, although he as also been seen sporting a peculiar hat at a popular tavern. Extremely dangerous – do not approach under any circumstances.

Mild-mannered head of the Floating School.

Sedition, treason, possession and circulation of illegal books, and running the notorious and unlicensed Floating School of Mandelion, violence on the waterways. Also wanted for questioning concerning the disappearance of Halk Partridge.

The constables advise against being deceived by Hopewood Pertellis' gentle, diffident and absent-minded manner.

Giving passage to travellers for money contrary to the edicts of the Watermen, shrine robbing, smuggling, associating with heretics and traitors.

Burly of build, tanned of feature, with an easily recognisable kink in one of his wrists. Halk Partridge has recently disappeared, perhaps to evade the consequences of his crimes.

Owner of a marriage house.

This man may be known by his caramel-coloured grin, and curious habit of starting his sentences in one tone and ending them in another. Often seen in the apparel of a priest.

Leading a most scurrilous organisation of sneak thieves, swindlers and pickpockets, and for devising stratagems of surpassing ingenuity.

This most notorious female disappeared from view many years ago, after being caught and branded as a warning to other light-fingered girls. Any rumours of resemblance between Mistress Fleetfinger and the plump and motherly Mistress Jennifer Bessel who runs a shop in Kempe Teetering are clearly a matter of malicious slander.

Assistant at the marriage house.

Accomplice in the questionable doings at Bockerby's marriage house. It is also believed that she may know something about the detestable Floating School, and the constables encourage her to come forward and give her information freely.

Has been cleared of involvement in all the felonies that fanciful rumour has linked to his name, notably: running the criminal underworld in the city of Scurrey, associating with and employing the very worst types of thief, ruffian, assassin and swindler, paying men to perjure their own souls in order to pervert the legal system, receiving stolen goods, compelling felons to work for him through blackmail or intimidation, and masterminding arson, countless thefts and at least twenty-nine murders. Aramai Goshawk, his army of thief-takers and the Locksmiths of which he is a member are also unquestionably innocent of the two hundred and seventy-four cases of entering without breaking which has been popularly linked to them.

All those who have sounded abroad the calumny that Aramai Goshawk is in fact using his thief-takers to provide the Locksmiths with a criminal empire in multiple cities have since disappeared without trace, no doubt too ashamed of spreading such slanders to face their fellow men.

The Duke's sister, owner of a crocodile.

The Guild of Stationers would respectfully request an audience with her ladyship that they might discuss some matters of state and law, notably the recent commotions in the city of Mandelion, the provenance of a certain signet ring, a little matter relating to some letters ostensibly from the Twin Queens and an incident involving a crocodile.

Once a respected member of the Stationers' Guild, Mye covered himself in infamy during the Year of the Dead Letter.

Sedition, heresy, blasphemy, for writing and circulating treasonous books, for impeding the licensed book-burners of the Stationers' Guild, for inciting maddened crowds to violence and riot.

A man of middle years, scholarly manner and acerbic tongue. Unfathomable eyes the colour of smoked glass, usually hidden behind pince-nez. Once a respected member of the Stationers' Guild, Mye covered himself in infamy during the Year of the Dead Letter. He disappeared at the height of the book riots, and it is believed that he may be dead.

Would welcome any information available concerning the whereabouts and current appearance of one Eponymous Clent. Anybody possessing such information should visit the coffeehouse known as the Hind at Bay, and look for a young man with chestnut hair, a travelling cloak and a slightly crushed-looking hat.

A street urchin working as a clothier's apprentice.

Attendance of radical meetings, associating with traitors, copying and circulating illegal tracts, organising 'classes' for the illegal Floating School, endangering the public with the use of savage, curious and bewildered animals, violence on the waterways.

Although given all the opportunities that come with an apprenticeship to a respectable clothier, this fifteen-year-old scapegrace has fallen in with men of twisted politics and been touched by their fantastical passion for equality. The lady onto whose hem he dropped a painted newt is also very upset.

Highway robbery, riding as leader of a coterie of similar ruffians, violence on the waterways. Also wanted for opposing the Duke's beagles in the pursuit of their duty, impeding the collection of taxes, and a number of other crimes which seem to have seduced rather than appalled the impressionable part of the populace.

Descriptions of this villain differ wildly. His eyes are variously described as grey, blue and green, and his height ranges from 'manly' to 'tall as an oak.' Whereas popular rhyme is eloquent on the subject of his 'brave, bright gaze' and 'cool, commanding air' the constables are willing to offer a generous reward for a description that contains rather more useful details.